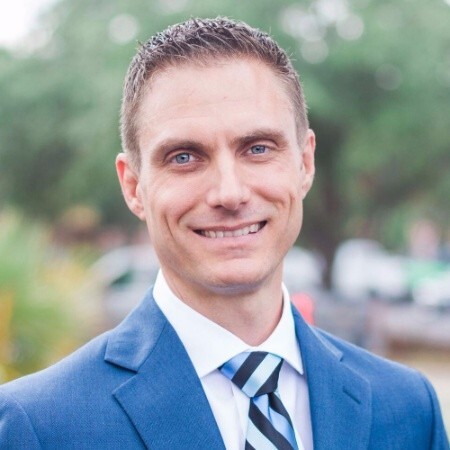 Jeremy Knauff is a digital marketing expert with over 20 years under his belt. He’s also the founder of Spartan Media, which offers web design, search engine optimization, social media marketing, and more. He’s been featured in Forbes and Entrepreneur.

I’ve been in digital marketing long enough that when I first started, most people said the internet would be a fad.

Along the way, I’ve had some big wins and some big losses. I helped one of my first clients go from being on the verge of bankruptcy to landing a $54 million dollar deal with a Fortune 100 company. More recently, we helped a small national start-up effectively compete with well-established competitors.

Spartan Media started as a full-service digital marketing agency, but we’ve recently pivoted to offering a service where we help people become the authority in their industry.

The catalyst for this pivot was that after facing a health crisis that nearly killed me, I had to rebuild my business from less than zero.

During the first two years of the health crisis, I generated close to no revenue, my finances were decimated, and I then had to start over — while still continuing to fight through my health challenges.

The authority building service we now offer is based on the strategies and tactics I used to quickly rebuild my own business.

My work ethic is a direct result of my upbringing. I didn’t grow up in what you would call a financially secure environment. Both of my parents worked, but they didn’t have high-income jobs — my mother worked for the school and my father worked, well, everywhere. He was a firefighter, but he always did other work on the side, too.

I remember countless weekends where I was dragged to construction sites while he worked on his days “off.”

This might surprise most people, but I actually enjoyed that, mainly because I got to hang out with him, which was rare considering how much he worked. It was also here where I learned how to curse really well.

I also learned how to do things that most people don’t seem to know how to do, and as a result of that, I can build or fix damn near anything.

And when I got bored, I could always explore the uncleared lots nearby. As a kid, I was always fascinated with the outdoors and wildlife, and this gave me a chance to wander around the woods alone but in a relatively safe environment.

I certainly had my share of problems and challenges growing up, many of which I’ve discussed publicly, but I don’t view them as a negative because they made me stronger.

I was always interested in art from my earliest memories, which led me towards graphic design initially.

But somewhere in my early teens, I felt a calling to serve in the military, and during high school, I enlisted in the United States Marine Corps.

I served for four years and then ended up returning to the civilian world, where I landed a job as a graphic designer at a small print shop. I loved the design aspect of the work, but it was a toxic work environment.

I left there to work in sales at a software company for a while before eventually returning to the marketing and advertising industry, where I took a job at a small agency.

That was one of the most important decisions in my career. And it’s crazy to think about how close that came to not happening.

I had highlighted the job listing for that particular job in the classified section of the newspaper and had it sitting on my desk for about a week. I was debating whether to even bother applying because they were looking for agency experience and a four-year degree.

Near the end of the day on a Friday, I called the owner and asked if they were still doing interviews. He told me that after two weeks of interviewing dozens of candidates, they had narrowed it down to two people — both of which had several years of experience, but he said I could come in for an interview before he left for the weekend.

I did, and after seeing my work, he hired me on the spot. I went on to work there for several years before eventually starting my own agency.

I loved everything about that job. The owner, David Kretschmar, had over forty years of experience so he was a wealth of knowledge when it came to anything related to design, advertising, and marketing. But beyond that, he was one of my most significant mentors and simply an amazing person.

I began to get paid for design and marketing almost immediately after getting out of the Marine Corps, but I wasn’t paid much because I chose the wrong company at first.

I made a bit more money when I later found the right agency to work for, but I didn’t start to see real money until I started my agency and set my own prices.

It’s important to point out that this doesn’t mean anything was wrong with my job at David’s agency. I was paid a fair wage for the work I performed, especially considering that I had no agency experience. I also benefited tremendously from his mentorship, which I believe played a big role in my success today. So I wouldn’t trade that experience for anything.

But we all have our own path. For some, that path is to work for someone else their entire life, while others are destined to break out on their own.

I did not get a college degree, although I did consider it more than a few times in my life. But the part that surprises most people is that I didn’t even finish high school.

Because my ASVAB scores were high enough, I was able to enlist without first graduating. At the time, I had planned on making a career out of the Marine Corps, so I didn’t care about that.

The reality is that a lack of a college degree, and shockingly, even the lack of a high school diploma, had no real impact on my success once I stopped assuming it would.

Quote: “The reality is that a lack of a college degree, and shockingly, even the lack of a high school diploma, had no real impact on my success once I stopped assuming it would.” – Jeremy Knauff

Most employers just wanted to know what I was capable of, and since I had put in the work to build my own portfolio to showcase that, it was a non-issue. And in over fifteen years of running my own agency, I have never had a single client ask whether I had a degree.

I believe that most employers today feel the same way I do. That’s why you’re starting to see even the tech giants, like Google, Apple, and Microsoft, who used to demand a degree, look at examples of a candidate’s work instead. And that’s smart because it tells you far more about their capabilities than any degree ever could.

My biggest challenge, without question, has been rebuilding my agency after nearly dying and then losing everything. In fact, this has been even more difficult than anything I had faced in the Marine Corps.

The key to overcoming any challenge or adversity comes down to three things.

The first, and most important, is believing that you can do it. Most people get overwhelmed because they look at their challenge in its entirety, but you don’t have to deal with it all at once. When you break a challenge down into more manageable chunks, it becomes less daunting.

You don’t have to fight the entire war — just one battle at a time.

The second is having a clear and powerful mission that drives you. This is critical, because if you’re just doing it for the money or to be “internet famous” then you’ll give up when things inevitably get tough. But if you have a reason that’s bigger than yourself, you’ll be more willing to push through adversity.

And the third is to build a solid network of trusted friends. When I was younger, I made the mistake of trying to do everything on my own – I didn’t trust anyone. This was because I had come from a world where my fellow Marines would put their lives on the line for me without question or hesitation, and I knew I wasn’t going to find that kind of relationship in the civilian world.

But when I had to rebuild after losing everything, I had no choice. So I begrudgingly put my ego aside and asked for help.

That first year back at it was both incredibly painful and incredibly rewarding because I went through a lot of personal growth.

Two amazing friends — Dave Davies and Cheryl Snapp Conner, who I had just met around this time, stepped up in ways that I would never have anticipated, and they never expected anything in return. Their help catapulted me back on the right trajectory.

Today, I trust them as much as any Marine I served with.

There are a number of others who I would love to acknowledge, but since space is limited, I’ll have to save them for my own book.

Finally, if I can leave you with any last words of advice, it’s this: Failure catches the weak when they put today’s comfort over tomorrow’s goals.

Too many people think they have to feel motivated or inspired to act. The truth is, you just need to be disciplined enough to take action regardless of your feelings.