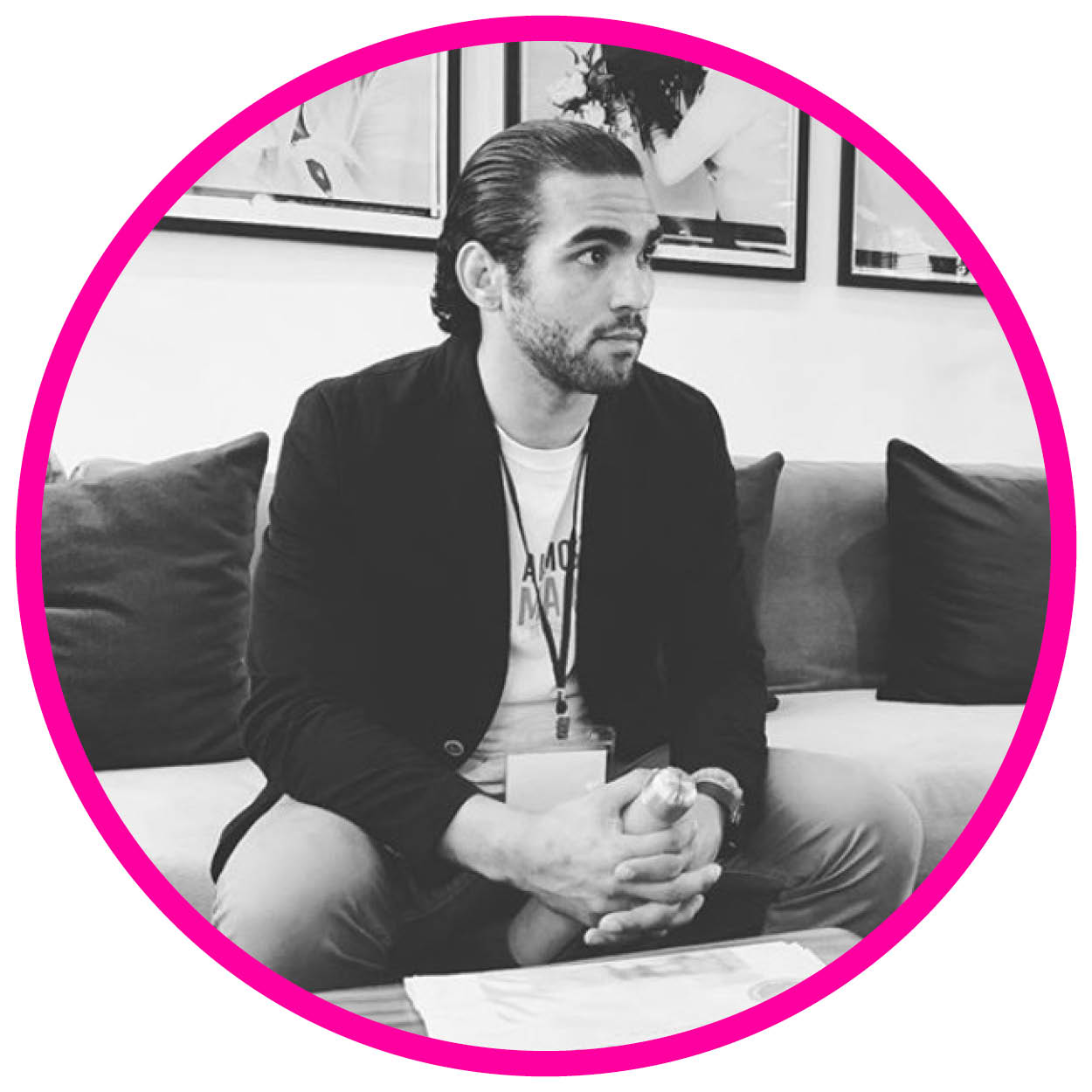 Kris Olivo is a college dropout who is a perfect example of where following your passions (and obsessions) can get you. He’s the co-founder of Almost Magical Marketing, which has broken multiple six figures since its start. He also helms two other brands: Badass Bookmarks, which donates one book to a child in need for every product sold, and Fire Your Marketing Team, a course and coaching program that teaches businesses how to grow without a marketing department.

Kris’s Original Story: “If Your Mind Isn’t Right, You’re Not Going to Win”

I became an entrepreneur out of desperation. I needed big solutions to bigger problems in my life. I started my first business while I was in the military. I was depressed and looking for an escape from the job I was in, so I started exploring any option I could find.

I grew up pretty poor in a violent area in New Jersey. I’ve spent most of my life relying on myself and feeling responsible for those around me. My parents got divorced when I was young and we didn’t have the most loving environment, which led to me having to learn a lot of stuff on my own and having really low self-esteem. When I was 14, I was failing school and knew I had to make a change if I wanted to avoid turning into my environment, so I moved to Florida with my dad. After I moved in with him, I decided to bite down and focus on what I wanted to do. I wanted to have impact and make change, but I realized in order to do that I had to become a person who could.

I think all the negativity around me was an absolute blessing. If my life would have been easy, I wouldn’t have the experiences I’ve had and I don’t know where I’d be. I always tell people failure and adversity are your best friends if you choose to learn from them wisely. To me, all of those things were boxes I had to check to get to where I am today. And, I have to tell you, I love my life now and what we do.

I have three Associate’s degrees. One general, and two I earned in the military: Aircraft Maintenance and Emergency Management (my second job in the military was handling all sorts of emergencies like plane crashes, bomb threats, active shooters, you name it). I also made it to my senior year in a Computer Science degree before I dropped out – I realized I didn’t need to code, I just needed to create.

The epiphany that ultimately led me to where I am today happened pretty randomly. I remember I sat down with a friend one day and he showed me a magic trick that blew my mind. Since I was depressed and stuck in a job I didn’t want, it was a jolt. It was the first time in a long time I had really felt anything, and that pushed me over the edge. A person without a passion is a hard person to be, in my opinion, and my lack of passion for anything was killing me inside.

But – this magic trick excited me. In fact, I got so excited about it, I challenged my friends to a bet on who could do the best magic trick within two weeks. During those two weeks, I became OBSESSED. I learned everything I could, and by the end of it I had put on an entire damn show. But it didn’t stop there – I kept obsessing afterward, learning every technique I could. Then, I had an epiphany. I was spending a lot of time and money on magic. I got curious as to how the people I bought magic tricks from produced, created and sold their products. That led me to want to create my own. So I did, and I started sending it to all the publishers I could find.

After a bunch of rejections and refinement, I eventually got picked up and published by Penguin Magic (the largest magic supply company in the world). Selling magic was the first time I ever made money online. From there I started exploring other possibilities and ended up meeting a guy in the military named Andrew Harris. He was working on a nightlife directory website called Nite Buzz, which he let me in on. It got expensive, though, and we had no idea what we were doing, so eventually we pivoted to app development because the dev for that was a lot shorter and we could get things out there quicker. We self-educated on developing apps without having to learn to code. We founded LOOT Studios, which stood for Life On Our Terms.

The first app we launched, we got 70K downloads and broke even. That was my second taste of mild success. From there we fell in love with our ideas and launched failed app after failed app, abandoning the principles that brought us that droplet of success to begin with. It was a game to us. The last app we worked on cost us one year of time and energy and about $10K. A huge portion of that went to a marketing agency run by this “guru.” We hired him to help us get downloads, but the game completely flopped. I couldn’t even get my friends to download it. We had spent so much of our time and money, but absolutely no one cared. That was a huge learning lesson for me. After that, I was terrified to pay anyone for marketing again, so once more I started obsessing and learning whatever I could to market our business better.

The app game got expensive, and we were ill-timed, so I decided to pivot to try to make more cash. I dove into real estate and did my own lead generation, but after a couple of deals I realized I hated it, so I decided to use my newfound marketing skills to start an agency. This was back in 2015-2016ish. Again, I had no idea what I was doing, but I was willing to try. I would walk into restaurants, buy a meal, and then rave to the owner about how good it was and that I wanted to help them get the word out so other people knew. When they asked me how I would do that, I told them I had my own marketing agency. I picked up five clients that way, but soon I had the overwhelming realization I didn’t know how to grow a business on my own, so I turned to my mentor at the time, a Harvard grad, ex-Wall Street guy. He introduced me to a CEO for a startup he helped fund and I decided to go humble myself and learn from her.

During my run there, I worked my ass off and killed myself for that CEO’s dream. I started off working directly for her and quickly moved into the Director of Sales position because I was the only one on our team who could sell our products. We launched brand after brand, penetrating every state in the U.S. with our products. One brand I created for the combat sports community (in which I’m deeply involved) took off. I toured the U.S. promoting it. It brought in investors and even TMZ covered us. Eventually, that led to connections which got our products into T.J. MAXX and Marshall’s. After two years of working there I ended up having a lot of moral disagreements with our CEO, which resulted in me quitting and starting the business I now run with a lot of the leadership from that startup (they left, too).

So, I and my best friend/partner, Heather Cutler, started Almost Magical Marketing. We started it without any money at all. When I left the startup, I was owed (and still to this day am owed) around $15K, and Heather about $12K, in backpay. The CEO was dishonest and would rather pay for Botox and Hawaiian vacations as opposed to paying her people. So we started AMM out of passion to create an honest business where we brought big experience to smaller brands.

Since starting, we’ve grown tremendously. We started out with one franchise client which we picked up by luck, and after breaking records and driving tons of traffic to their grand opening, we got invited to speak, and that eventually led to us being a mandatory vendor for the franchise. We broke multiple six figures with our business pretty quickly and are close to breaking seven figures soon.

Doing the work we’ve done at Almost Magical has led to a lot of positivity in our lives. Most recently, I got invited to speak at a summit about chatbots and messenger marketing (one of the things we’re experts at and known for) where I educated over 2,000 people live on effective advertising techniques. Our success at Almost Magical has led to a lot of projects fueled by passion. We started a brand called Badass Bookmarks, where we work to empower and improve knowledge retention using our unique, edgy bookmarks. Whenever someone buys a bookmark, we donate a book to a child in need. In some areas there are as few as one book to 800 children, so that’s close to our hearts, as self-education has been the biggest catalyst for success in my life (I grew up poor and I’m a college dropout).

We’ve also started making our mark in the education space to further give back. We started a course/coaching program called Fire Your Marketing Team that teaches businesses how to grow on their own without relying on marketing teams all the time. We’re pretty against the grain in a lot of things.

For me, the realization of “this is what I love to do” came after I saw how our work impacted other people. I’m not passionate about techniques or tactics. I’m passionate about impact and making positive change. When a business owner comes to me frantic about their problems and livelihood, I love the feeling of helping them solve their problems and helping them to thrive. My social media handle is @conundrumkris. A conundrum is a difficult problem to solve or a complex riddle. I’m all about solving problems.

As far as problems specific to entrepreneurs, I’d say mindset and focus are the biggest challenges. We live in a three-second world and everything competes for our attention. Staying focused is crucial to getting anywhere. Focus breeds strength. Focus light, and it becomes a laser that can cut through a diamond. It’s a universal principle. Mindset is the thing that allows you to focus and be your best. If your mind isn’t right, you’re not going to win. The advice I’d give to anyone is to address your real problems, focus as hard as you can, read about people who have done it, and realize you’re just as good as any of them. Why not you?