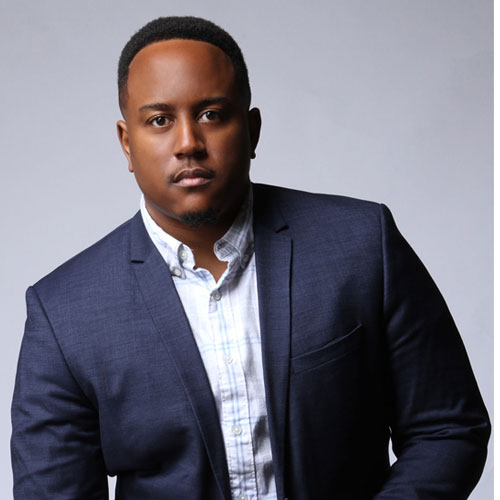 Troy Sandidge is the founder and Marketing Strategy Executive of FindTroy Marketing Solutions, a marketing strategy consulting agency as well as a Chief Strategy Officer of a national brand agency. He has partnered with brands and worked on projects for national organizations that have cumulatively generated millions of dollars in revenue and counting. He has been featured in Inc., HuffPost, ABC, NBC, FOX, LA Wire, American Reporter, Daily Herald, Chicago Tribune, and NY Weekly, to name a few.

Troy’s Original Story: “The Challenges Don’t Go Away the Higher You Go”

I grew up in a blue-collar, strong family rooted in spirituality that always pushed me to do more and never settle for less. I lost my birth mom when I was eight on Valentine’s Day due to lupus and heart failure. That loss alone could have broken me, but I I kept going, and I truly believe it was due to the grace of God, family, and the will I have deep inside.

As you can imagine, even in the 21st century, being a young and ambitious African American is challenging. From the time I was given the talk and made “aware” of the world I would have to live in, I knew the extra weight of systematic and systemic racism, unconscious and implicit bias, prejudice, hatred, stereotypes, stigmas, moral and spiritual challenges, would be things I would have to carry on top of the average weight a man has to bear. I would have to find comfort in being uncomfortable to even have a chance at something more. But I guess you could say I had the DNA for this since the very beginning. I was born two pounds, two ounces and was three months premature. That is the equivalent of two packages of bacon (2 pounds), one golf ball (1.5 ounces), two pennies and four dimes (0.5 ounces). I had to have immediate, life-saving surgery three days after I was born. It was like operating on a G.I. Joe, my dad would say. I had to stay in an incubator for three months and after all that, they still weren’t sure what was going to become of me. Fast-forward to 2015, when I got hit in the head while enjoying dinner. It would change the course of my life forever, as I needed to have subsequent brain surgeries in 2015, 2016, and 2017.

My journey has shown me that anyone can be more than their origin story, their past and, most importantly, the stereotypes and stigmas branded on them. Those who seek to accept the extra weight, the resistance, who look those obstacles and challenges in the eye and keep moving forward anyway, are just doing extra mental reps that make them twice as strong. They develop immunity to things that would hold others back.

Resiliency – I’m familiar with the word. My whole life, the numbers were never in my favor. Impossible was my lot from the start. But even then, all I needed was an opportunity. Reflecting back, that’s my biggest takeaway from how I grew up. If I could just get from one opportunity to another, no matter how small, I knew I would gain enough strength to keep going.

One of those opportunities was to be a social media strategist intern in the first-ever black-owned agency in my hometown. My creative ideas, initiative, and ability to connect served as a vehicle for a jump in success for the agency. I closed a significant number of deals, even though I was an intern. As young as I was, I was yet able to hold my own in meetings with executives on behalf of an agency to make business happen. I knew I had something there.

Rather than education, college prepared me more so for the personal battles I would have to face in my work. (I originally went for a degree in Electrical Engineering but was forced into a situation where I had to make a shift my junior year. I ended up getting a degree in Digital Media & Communications.) I was pursuing a career in an industry that wasn’t fully established or well-known in a world of people who didn’t look anything like me, sound like me, or pursue communities and audience groups that identified with me. The adversities I faced, and the untold stories I endured while pursuing my degree full time, working a part-time job, commuting every single day for four years to save my parents money, having to get multiple Deans to sign waivers for me to exceed the recommended amount of credits to graduate on time, being the only person of color in most of my classes, holding on to my morals even when it was hard, shaped and prepared me for the even harder task of pursuing this calling I had to be a marketer.

Books expire. Things become outdated. I can’t credit college for teaching me the literal knowledge I needed in my career because the technology, the social platforms, the applications weren’t even in existence. But what I can credit college for, is showing me at the base level, I would have to work harder and do more than the average person to achieve something. College taught me that I could defy all odds and win despite the deck stacked against me, and I could create the reality I wanted simply by having the will to not settle. So I had to work 10x harder as a POC to obtain and achieve while others had the luxury of favoritism and connections to get the same grades or better.

But what I had developed in college was professional grit. College was like a vaccine that allowed me to develop tolerance for what I would face in the professional world. As happy and proud as I am to have achieved and graduated college, as only 40% of African American males graduate, that piece of paper was just a key to get in the door of opportunity. From there, grades, student ranking, popularity, won’t help anyone anymore. From there, it’s all up to you.

I once lost a job directly due to racism. And it crushed me. I didn’t want to do social media, digital marketing, content marketing, or anything of the sort any more. But an opportunity came where an agency in rebuild mode wanted to hire me to oversee strategy. I didn’t think I could even do the job. But I accepted. Not long after, I realized marketing strategy was my calling. It balanced my desire to be part of everything with my ability to see the bigger picture to achieve the results we wanted. For the first time in my life, my always-thinking, creative mind was useful.

Of course, entrepreneurship brings on its own set of challenges for anyone, let alone a POC. The literal definition of an entrepreneur is “one who chooses to create a business or businesses, taking on greater than normal risk in order to do so.”

Quote: “An entrepreneur is ‘one who chooses to create a business or businesses, taking on greater than normal risk in order to do so.’” – Troy Sandidge

My first challenge as a BIPOC, underrepresented individual in this position was to accept the vision of success I had for myself. The deck is already stacked against me if I just “stay in my lane” and do “regular stuff.” Hold on tight to that vision, because that is all you’ll have to keep going for a long time. You see, most of society, even the closest people to you, won’t see the vision you have. You see blue when everyone else is saying they see red. It’s hard to wrap your head around something that is invisible to everyone else but you, that you hear this calling that no one else seems to be able to hear. There’s a difference between acknowledging your calling and accepting your calling. Too many say they “accept” when they are simply acknowledging. Accepting is actually one step further. It’s considering your vision valid, that it must be true and if it is true, you must therefore pursue.

My second challenge was seeing my worth. How you see yourself will be directly tied to how much you will be able to make in your pursuit as an entrepreneur. It took me a long time to accept that I am worthy and that I am a premium brand. Sure, we all struggle trying to generate our own money, obtain clients, raise prices, but all that is tied back to knowing your worth. It’s eliminating all of the biases and doubts, making the conscious decision to say “I am worthy of this level of success,” embracing it, and going full force in that direction.

And the thing is, the challenges don’t go away the higher you go. You simply become strong enough where you can carry the load the challenges bring to acquire the success you want.

We will never be perfect. There is no perfect business plan, strategy, process, industry, or company. We’re not chasing perfection as entrepreneurs nor simply as humans. But we can pursue making progress. And whether that’s a small leap or a leap of faith, if you are called upon to do what you do in the way that feels right as an entrepreneur, as a businessperson, as a human, then pursue it with everything you have. Success is simply continuing to make the effort of forward progress no matter what. Each step adds up when you look back.